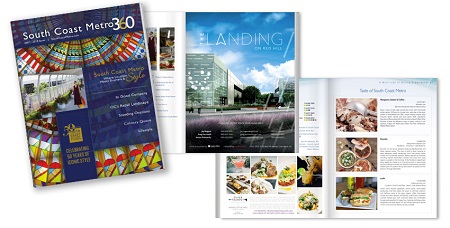 The glossy, full-color magazine acknowledges the insights and contributions of the visionary Segerstrom family, who established South Coast Plaza in 1967, laying the foundation for all of the development that followed.

South Coast Metro 360 is now available in office buildings, hotels, retail establishments, and the offices of Orange County commercial real estate brokers, as well as in the three terminals at John Wayne Airport.

The 76-page magazine highlights the many amenities, businesses, organizations and institutions that have a presence in the area. Featured sections in this issue are In Good Company, which includes saluting commercial real estate professionals and company profiles, and OC’s Retail Landscape, including world-class South Coast Plaza, the eclectic SOBECA District, South Coast Collection and others.

Taking center stage in the aptly named Standing Ovations section are Segerstrom Center for the Arts and South Coast Repertory, along with other arts organizations.

The Higher Education section details the many educational opportunities that abound in South Coast Metro, while the Home Away From Home showcases the area’s hotels and residential communities. The Culinary Queue introduces readers to scores of dining adventures, with the Taste of South Coast Metro section offering taste-tempting detail about a few hotspots.

South Coast Metro 360 is a publication of the South Coast Metro Alliance, which for over a quarter-century has implemented and coordinated programs that focus on marketing, business attraction, expansion and retention as it unites developers, property owners and key corporate leaders who are focused on nurturing business relationships.