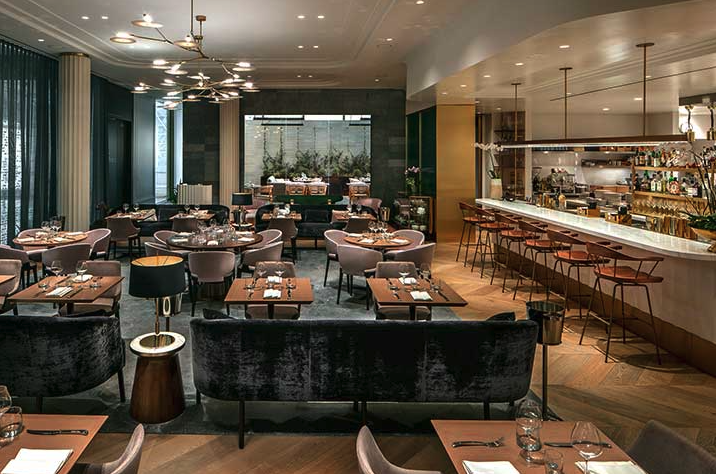 Chef Carlos Salgado’s Taco María is a Mexican-inspired restaurant that was awarded a Michelin star in 2019 and 2021. Honoring his family’s culture and hard work, Salgado has created an Alta California cuisine, which combines both Mexican and American cultures. Using the best ingredients available and applying the techniques and values he learned in Michelin-starred restaurants, Salgado has continued to impress and delight new and returning guests and food critics with creative Mexican-inspired dishes since opening Taco María in 2013.

“We conceptualized this restaurant to complement the extraordinary luxury retail collection at South Coast Plaza and named it ‘Knife Pleat’ after the fashion term, as a play on couture and cuisine,” shared Sarmadi.  “The restaurant showcases the elevated but approachable cuisine that Tony has cultivated from 25 years of fine dining experience.”

Though a fairly recent addition to South Coast Metro’s dining scene, Knife Pleat has proven to be a luxe culinary experience for Southern California diners as it received a Michelin star in late 2021. At Knife pleat, diners can expect a sophisticated menu created by Chef Esnault, including high tea, caviar service, weekend six-course tasting menus with optional wine pairings, and a popular prix fixe lunch.

Simple yet undeniably impressive, Hana re is regarded as one of South Coast Metro’s hidden gems. Both in 2019 and 2021, Chef Atsushi Yokoyama’s restaurant received a Michelin star for its high-quality dining experience. At Hana re, what most guests seek to experience right before their eyes is an inspired and carefully crafted omakase at the coveted 10-seat sushi bar. Chef Yokoyama uses only selected fresh farm and marine products to create assortments of zensai, tailed by a piece of peak-season fish masterfully cut, modestly seasoned and entirely pleasing; Cuttlefish dashi, served in a frosted vessel decked out with house-cured salmon roe and petals of uni; Kegani harmoniously foiled by fleshy okra; among many other delicious and fresh sashimi and nigiri.

To learn more about the restaurants in the South Coast Metro area, visit southcoastmetro.com/dining.