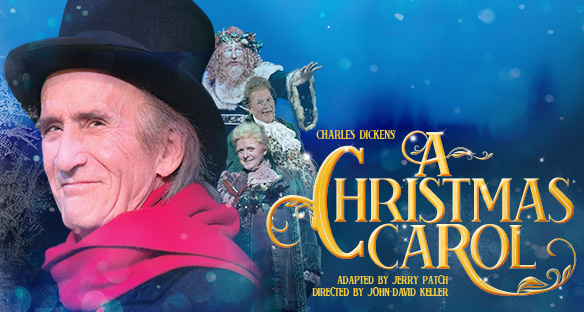 Nobody “Bah-humbugs” quite like Hal Landon Jr. Or somersaults into a top hat and pops up ready to meet Christmas Day in style. The New York Times acknowledged him as one of the longest-running Ebenezer Scrooges in the country. But, on Dec. 24, 2019, after 40 years of playing Scrooge—a role he originated for South Coast Repertory’s popular adaptation of A Christmas Carol—Landon will hang up his top hat.

“For me, this 40-year run has so many stand-outs,” said Landon. “Playing such a terrific role and having an extended period of time to develop it has been immensely satisfying and made me a better actor, too. Also, to share the success of A Christmas Carol with the SCR family of talented actors and be able to create a true ensemble under director J.D. Keller’s inspired guidance. And, of course, the response from our audience—knowing how much the show means to them—is one of the big reasons I’ve done it for so long.”

“Hal was our immediate choice to portray Scrooge when this production started,” said SCR Founding Artistic Director David Emmes. “Even as a younger actor, Hal was able to carry the weight of Scrooge’s path to redemption. This is a complicated and demanding role and, each season, Hal’s performance has grown stronger as he continues to explore and deepen Scrooge. Hal’s dedication to this production, to his actor’s craft, to his fellow cast members and to our Orange County audiences over the span of four decades is truly exceptional.”

“Our audiences may rest assured that A Christmas Carol will remain part of the tradition and the fabric of South Coast Repertory,” said Artistic Director David Ivers. “Hal has brought a brilliant sense of humor and pathos to Scrooge over the decades and I admire both his performance and this production. While these are big shoes to fill, Dickens’ timeless classic—with its rich language—will be at the center of our programming.”

A Christmas Carol tickets will go on sale to the general public on June 10, following an exclusive pre-purchase period for 2019-20 SCR subscribers that begins the week of March 25.