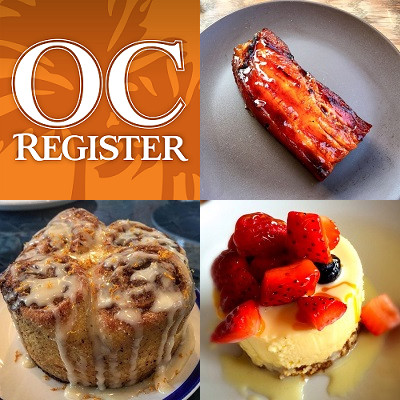 These aren’t your everyday indulgences

They serve it only on weekends, and it’s the number one reason I keep returning to Taco Maria for brunch. The bacon is almost as thick as a steakhouse steak. They serve it with a steak knife, but it’s so tender that you could cut it with your spoon. They braise it overnight in a glaze of Mexican brown sugar. Brunch is actually a prix fixe affair, three courses for $39 (and you’ll want to get the pancakes). The bacon is an add-on $7.
3313 Hyland Ave., Costa Mesa; 714.538.8444, tacomaria.com

Normally when you order cheesecake, you can (and probably should) expect an enormous slice of cake that nobody in their right mind would attempt to eat alone. (Not that I haven’t done it.) And that’s what I find so irresistible about the cheesecake at Onotria. This one might actually be more pleasure than guilt. It is tiny and distinctly citrusy, drizzled with vanilla-lemon cream. It is one of the best cheesecakes you will ever find. Cost: $8.
2831 Bristol St., Costa Mesa; 714.641.5952, onotria.com

I’ve written a lot about the beautiful layer cakes at Marin. But truth be told, my favorite guilty pleasure at this elegant little dinner is the cinnamon roll. They take their wonderful brioche dough and roll it into a bun with loads of cinnamon and bake it in the wood-fire oven, then glaze it with housemade caramel. Cost: $9.
3321 Hyland Ave., Costa Mesa; 949.402.3974, restaurantmarin.com