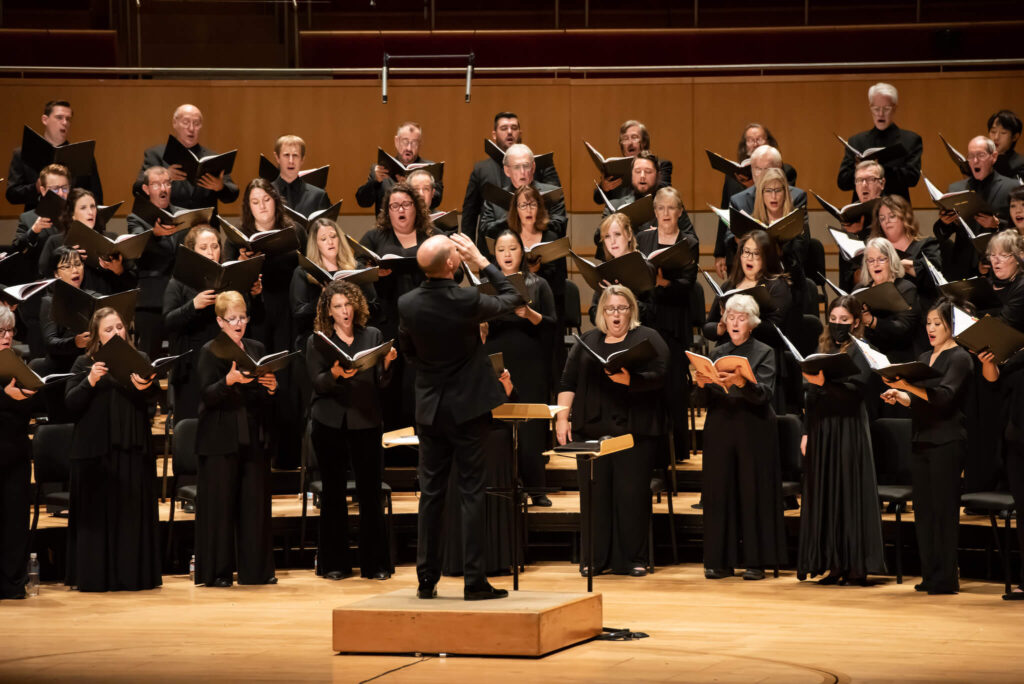 The Grammy-winning choir, whose performances have been hailed as “ethereal” (LA Opus), “thrilling” and “sublime” (Classical Voice), also embarks on its first international tour in seven years, taking its artistry to leading venues in Austria, Germany and the United Kingdom during summer 2023. Istad will conduct all five programs as well as the tour performances.

The chorus’ 55th season opens with Jocelyn Hagen’s The Notebooks of Leonardo da Vinci, a mesmerizing multi-media work for choir, orchestra and projections inspired by the writings and art featured in the iconic Renaissance artist’s personal notebooks. Composed to honor da Vinci’s remarkable legacy on the 500th anniversary of his death in 2019, the nine-movement piece is set to text from his notebooks, which draw on themes of art, science, nature, and technology.

Pacific Chorale displays its considerable vocal dexterity when special guests Bach Collegium San Diego, one of the country’s premier early music ensembles, and its founder, organist Ruben Valenzuela, join the choir for a historically-informed performance of Monteverdi’s “Vespers of 1610,” a pillar of the Baroque music canon whose splendor and virtuosity has captivated audiences for centuries. (Saturday, March 4, 2023, 8:00 pm, Our Lady Queen of Angels Catholic Church, Newport Beach.)

In the season finale, Istad leads the orchestral world premiere of groundbreaking composer Florence Price’s newly discovered Abraham Lincoln Walks at Midnight, a setting of Springfield, Illinois-native Nicholas Vachel Lindsay’s ardent anti-war poem of the same name. The long-lost manuscript by Price, one of the first American women to be widely recognized as a symphonic composer, was recovered from an abandoned house in Illinois in 2009 and is thought to have been completed sometime between 1914 and 1949.

Her work is paired with Haydn’s masterpiece Missa in Angustiis (Mass in Time of Anxiety) “Nelson Mass,” composed in 1798, at a time of tremendous turmoil when the citizens of Austria feared defeat by Napoleon’s troops. These works, although grounded in the new and old worlds respectively and composed more than a century apart, both address the futility of war. (Saturday, May 20, 2023, 5:00 pm, Renée and Henry Segerstrom Concert Hall.) The Chorale will also host its annual Gala immediately following the concert, to celebrate and benefit the upcoming European tour.

During its European tour, July 12-24, 2023, the chorus performs alongside several regional orchestras the two pieces from its season finale, Price’s rediscovered masterwork, Abraham Lincoln Walks at Midnight, and Haydn’s Nelson Mass. The choir is slated to appear at such iconic venues as the Salzburg Cathedral, which holds one of Austria’s most important music archives, and, in the U.K., Salisbury Cathedral, which houses one of only four original copies of the Magna Carta known to exist, and Oxford University’s Sheldonian Theatre. Pacific Chorale also tours to Munich and Bath, among other locales.

“They are extraordinary pieces by two exceptional female composers, and I am thrilled to be able share them with our audience. It promises to be a tour de force season as we showcase our outstanding singers on those important newer pieces as well as the enduring choral masterworks of Duruflé, Haydn and Monteverdi and other significant repertoire.”

“We are deeply grateful for the steadfast leadership of our Board of Directors, the generosity of our donors, and the enthusiasm and support of our audience members for helping to make possible a season of this scope as well as our upcoming international tour,” says Brown. “We also proudly recognize the outstanding talent and dedication of our singers and look forward to sharing Pacific Chorale’s remarkable artistry with audiences locally and abroad, sparking joy and passion as only music can and further cementing Pacific Chorale’s remarkable legacy.”

In addition to presenting its own concert series, the Chorale appears with the Los Angeles Philharmonic in “Amadeus Live in Concert,” conducted by Sarah Hicks at the Hollywood Bowl (August 23, 2022). The choir also makes guest appearances on five Pacific Symphony programs this season at the Reneé and Henry Segerstrom Concert Hall. They include Holst’s The Planets led by Karen Kamensek (November 17-19, 2022); Handel’s Messiah conducted by Pacific Chorale’s own Robert Istad (December 4, 2022); three presentations under the baton of Carl St.Clair – A Lunar New Year program (January 28, 2023), Verdi’s Rigoletto (April 20-25, 2023), and “Cathedrals of Sound,” featuring St.Clair conducting the world premiere of James MacMillan’s Fiat Lux, commissioned by Pacific Symphony for Pacific Chorale and Pacific Symphony, as well as Istad guest-conducting Allegri’s Miserere mei, Deus (June 15-17, 2023).

Season tickets are available in packages of 3 to 5 concerts, ranging in price from $64 to $498. Single tickets to individual performances, beginning at $25, go on sale on Tuesday, September 6, 2022. All Pacific Chorale concerts are presented in the Renée and Henry Segerstrom Concert Hall in Costa Mesa, CA, except for “Carols by Candlelight” and “Monteverdi Vespers,” which are presented in Our Lady Queen of Angels Catholic Church in Newport Beach, CA. For tickets and information, visit www.pacificchorale.org or call 714-662-2345.