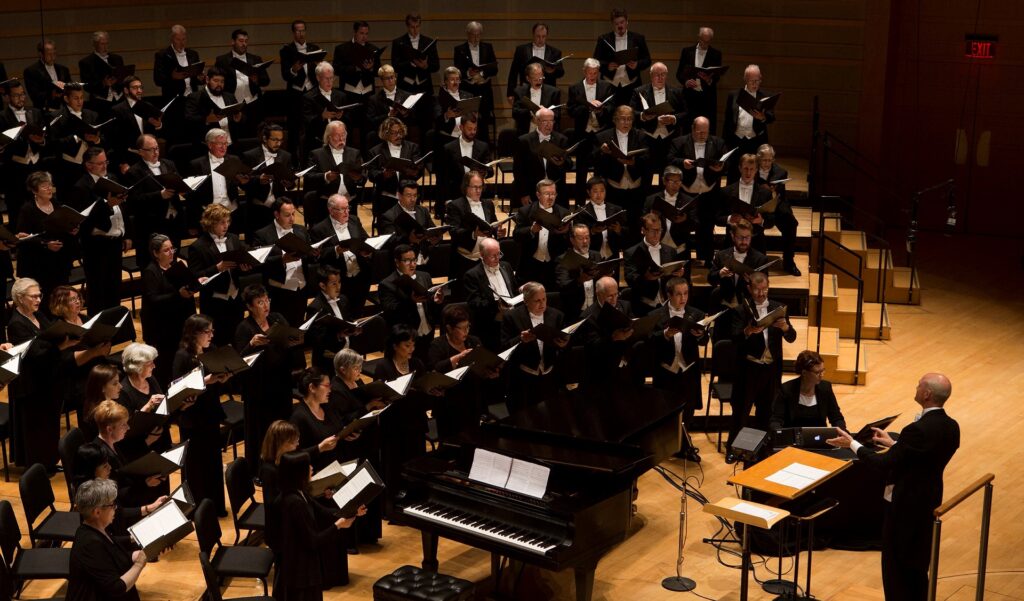 COSTA MESA, CA (September 4, 2021) – Pacific Chorale, considered one of the nation’s leading choirs, launches its 2021-22 Season with a luminous program anchored by Rachmaninoff’s a cappella masterwork Vespers (All-Night Vigil) conducted by Artistic Director Robert Istad on Saturday, October 30, 2021, 7 pm, at the Renée and Henry Segerstrom Concert Hall in Costa Mesa. Istad also leads the Pacific Chorale-commissioned world premiere of The Stillness Chained by Grammy-nominated former Composer-in-Residence Tarik O’Regan, set to the poetry of Yone Noguchi. Additionally, the chorus performs the West Coast premiere of Damien Geter’s profound Cantata for a More Hopeful Tomorrow, featuring celebrated soprano Aundi Marie Moore, hailed for “her vivid, rich voice” (Washington Classical Review), and Pacific Symphony Principal Cellist Warren Hagerty, a “thoughtful, impressive” artist (Singapore’s The Straits Times), which offers a message of hope refracted through the lens of Bach’s musical legacy interwoven with African-American spirituals. The program – and the Chorale’s 54th Season – opens with Hyo-Won Woo’s dramatic Me-Na-Ri (Space Music), a work sung in Korean that stretches the boundaries of choral music. The concert, featuring 80 chorus members, marks the first live performance in more than 19 months by Pacific Chorale, an Orange County “treasure” that “can sing anything you put in front of it, with polish, poise and tonal splendor” (Orange County Register). Audience members must show proof of vaccination and wear masks inside the venue (COVID protocols detailed below).

“I can’t wait to welcome audience members and Pacific Chorale’s singers back inside the concert hall with this significant program so we can all, once again, enjoy the visceral experience of a live performance,” says Istad. “The repertoire showcases the choir’s remarkable technical and sonic malleability. Rachmaninoff’s Vespers (All-Night Vigil) is a work we’ve performed numerous times that’s beloved by our singers and audiences alike. Pairing it with Tarik O’Regan’s world premiere adds a wonderful sonorous dimension to the program as does the West Coast premiere of Damien Geter’s Cantata for a More Hopeful Tomorrow, a new work that I was completely taken with when I first heard it — it’s concurrently emotionally raw, tragic, and optimistic. I am particularly excited to have soprano Aundi Marie Moore join us to reprise her solo role from the work’s digital premiere with the Washington Chorus in November 2020.”

Single tickets for the concert range from $25 to $70. The Renée and Henry Segerstrom Concert Hall is located at 600 Town Center Drive, Costa Mesa, CA 92626. For tickets and information, visit www.pacificchorale.org or call 714-662-2345.

Pacific Chorale continues to make the health and safety of its patrons, artists and community its top priority and has adopted the requirement that all audience members attending indoor performances be fully vaccinated against COVID-19. In order to be considered fully vaccinated, patrons must confirm that at least 14 days have passed since receiving the second dose of FDA or WHO authorized double-dose vaccines or that at least 14 days have passed since receiving the sole dose of FDA or WHO authorized single-dose vaccines. Audience members may display proof of vaccine on a smartphone or by showing a physical copy of their vaccination card or official vaccination record. Children under 12 and those who are unvaccinated due to a medical or religious reason must provide proof of a negative PCR COVID-19 test taken no more than 48 hours prior to attending. Rapid or antigen tests will not be accepted. All guests, regardless of vaccination status, are required to wear masks while inside the concert venue. These safety protocols will be re-assessed on an ongoing basis and may be adjusted as public health circumstances evolve. The Chorale is closely monitoring industry and government guidance regarding the COVID-19 virus, including information supplied by the State of California, California Department of Public Health, Centers for Disease Control and Prevention, and the Orange County Department of Public Health. For information on Pacific Chorale’s most current health and safety protocols, please visit https://www.pacificchorale.org/covid-returning-to-live-performances/.

ROBERT ISTAD, who “fashions fluent and sumptuous readings” (Voice of OC) with his “phenomenal” artistry (Los Angeles Times), was appointed Pacific Chorale’s Artistic Director in 2017. Under his leadership, the chorus continues to expand its reputation for excellence for delivering fresh, thought-provoking interpretations of beloved masterworks, rarely performed gems and newly commissioned pieces. His artistic impact can be heard on two recent recordings featuring Pacific Chorale: “Mahler’s Eighth Symphony” with the Los Angeles Philharmonic Orchestra conducted by Gustavo Dudamel on Deutsche Grammophon (2021), for which he prepared the chorus, and “All Things Common: The Music of Tarik O’Regan,” which he conducted, on Yarlung Records (2020). Istad has also prepared choruses for such renowned conductors as Esa-Pekka Salonen, John Williams, John Mauceri, Keith Lockhart, Nicholas McGegan, Vasilly Sinaisky, Sir Andrew Davis, Bramwell Tovey, Carl St.Clair, Eugene Kohn, Giancarlo Guerrero, Marin Alsop, George Fenton, and Robert Moody. He regularly conducts and collaborates with Pacific Symphony, Musica Angelica Baroque Orchestra, Sony Classical Records, Yarlung Records, Berkshire Choral International, and Long Beach Symphony Orchestra. An esteemed educator, Istad is Professor of Music and Director of Choral Studies at California State University, Fullerton, where he was recognized as CSUF’s 2016 Outstanding Professor of the Year. He conducts the University Singers and manages a large graduate conducting program, in addition to teaching courses on conducting and performance practice. Istad, who is on the Executive Board of Directors of Chorus America and serves as Dean of Chorus America’s Conducting Academy, is in demand as guest conductor, lecturer, and clinician.

WARREN HAGERTY, Principal Cello of Pacific Symphony, was a founding member of the Verona Quartet, which earned top prizes in international chamber music competitions on four continents, including the Wigmore Hall, Osaka, and Melbourne international string quartet competitions, Fischoff National Chamber Music Competition and Concert Artists Guild’s Victor Elmaleh Competition. Hagerty has appeared with such leading artists as Renée Fleming, David Shifrin, Cho-Liang Lin and Orion Weiss as well as at numerous festivals, including the La Jolla Music Society SummerFest, Chelsea Music Festival, among others. A proponent of new music, Hagerty was involved in commissioning and premiering Michael Gilbertson’s first string quartet, which was a finalist for the 2018 Pulitizer Prize in music. He has also premiered works by Richard Danielpour and Sebastian Currier. Director of Junior Chamber Music Los Angeles, he has held teaching positions at The Julliard School and Indiana University, faculty positions at Oberlin String Quartet Intensive and Festival, and Teaching Artist positions with Youth Orchestra Los Angeles and Caesura Youth Orchestra. Hagerty is an alumnus of Orange County School of the Arts and holds degrees from The Julliard School and Indiana University’s Jacobs School of Music.

AUNDI MARIE MOORE, a proud native of Chesapeake, Virginia, has quickly established herself as one of America’s leading young sopranos, receiving accolades from audience and critics alike. She is a former member of the Domingo-Cafritz Washington National Opera Young Artist Program, where Maestro Placido Domingo hand-selected her among hundreds of applicants. Winner of the 2015 American Prize in Voice, Moore has been hailed for possessing a voice of “clarion beauty” (The Washington Post) with “tender effect…compelling” (Opera News), and her “honeyed tone” (The New York Times). Moore, the 2016 Bronze Medalist at the American Traditions Competition in Savannah, Georgia, has appeared with the Buffalo Symphony, Virginia Symphony, and North Carolina Symphony. On the opera stage, her roles have included Donna Elvira in Don Giovanni with L’Opéra de Monte Carlo, Nedda in Pagliacci with Sarasota Opera, Serena in Porgy and Bess with Atlanta Opera and Virginia Opera, Young African American Soprano in the world premiere of Ricky Ian Gordon’s Rappahannock County with Virginia Opera, Soprano 2 in the U.S. premiere of Facing Goya with Spoleto Festival USA, and Odessa Clay in the world premiere of Approaching Ali with Washington National Opera, a performance in which The Baltimore Sun reported, “Aundi Marie Moore nearly walked off with the opera in the supporting role of Ali’s mother, Odessa. Her radiant soprano lit up the Terrace Theater even when she was just softly humming; her portrayal was remarkably detailed and touching.” An extremely versatile singer, Moore is also comfortable on musical theater stage, performing as Lady Thiang in The King and I with Lyric Opera of Virginia, and Nettie Fowler in Carousel with Ashlawn Music Festival. Among her concert engagements, Moor appeared with the New World Symphony under the baton of Maestro Steven Jarvi as well as the National Symphony Orchestra conducted by Marvin Hamlisch.

PACIFIC CHORALE, an Orange County “treasure” with a “fresh viewpoint” that “can sing anything you put in front of it, with polish, poise and tonal splendor” (Orange County Register) has “risen to national prominence” (Los Angeles Times) since its inception in 1968. Hailed for delivering “thrilling entertainment” (Voice of OC), the resident choir at Segerstrom Center for the Arts is noted for its artistic innovation and commitment to expanding the choral repertoire. It has given world, U.S., and West Coast premieres of more than 35 works, including numerous commissions, by such lauded composers as John Adams, Jake Heggie, James Hopkins, David Lang, Morten Lauridsen, Ravel, Tarik O’Regan, Karen Thomas, Frank Ticheli, András Gábor Virágh, and Eric Whitacre. In addition to presenting its own concert series each season, Pacific Chorale enjoys a long-standing partnership with Pacific Symphony, with whom the choir made its highly anticipated Carnegie Hall debut in 2018. The chorus also regularly appears with the Los Angeles Philharmonic, and has performed with such leading orchestras as the Boston Symphony, National Symphony, Los Angeles Chamber Orchestra, Philharmonia Baroque Orchestra, San Diego Symphony, and Musica Angelica, among others. Pacific Chorale has garnered international acclaim as well, having toured extensively to more than 19 countries in Europe, South America, and Asia, and through collaborations with the London Symphony, Munich Symphony, L’Orchestre Lamoureux and L’Orchestre de St-Louis-en-l’Île of Paris, National Orchestra of Belgium, China National Symphony, Hong Kong Sinfonietta, Estonian National Symphony, and Orquesta Sinfonica Nacional of Argentina, among others. Deeply committed to making choral music accessible to people of all ages, the organization, which has a discography of 14 self-produced recordings and an extensive collection of exceptional free digital offerings, places a significant emphasis on choral music education, providing after-school vocal programs for elementary school students, a choral summer camp for high school students, and an annual community-wide singing event at Segerstrom Center for the Arts. www.pacificchorale.org