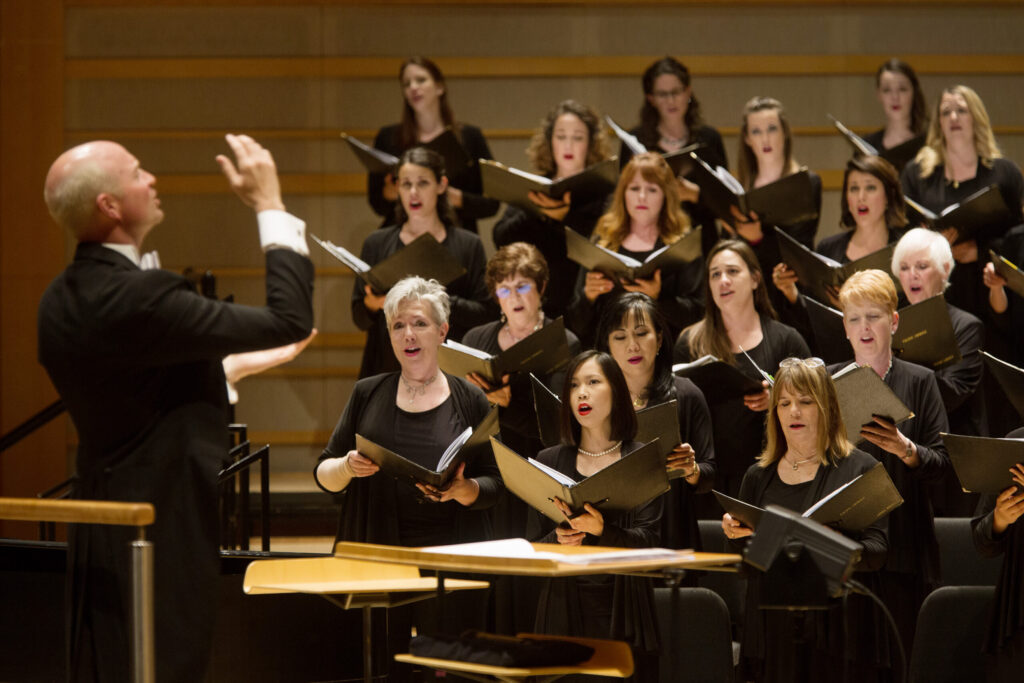 Each of the five programs includes a range of compelling works by some of the most groundbreaking composers of our time, including the West Coast premieres of Damien Geter’s profound Cantata for a More Hopeful Tomorrow, a message of hope refracted through the lens of Bach’s musical legacy interwoven with African-American spirituals, featuring celebrated soprano Aundi Marie Moore and Pacific Symphony Principal Cellist Warren Hagerty; and Frank Ticheli’s Until Forever Fades Away, a poetic meditation on the elusive nature of time.

Among other vibrant contemporary choral works, Istad conducts Pulitzer Prize winner Caroline Shaw’s and the swallow, a setting of Psalm 84 inspired by the Syrian refugee crisis, and her playful Music in Common Time for choir and orchestra; Paul Fowler’s wordless, hypnotic Calling; and Edie Hill’s poignant We Bloomed in Spring, set to the words of St. Teresa of Avila. Pacific Chorale also performs leading Estonian composer Galina Grigorjeva’s On Leaving, a contemplation on the soul’s release from the mortal body; Spiritus Mundi, Dale Trumbore’s hymn of gratitude for the fruits of the earth; Jake Runestad’s exuberant setting of Walt Whitman’s Proud Music of the Storm; and South Korean composer Hyo-Won Woo’s dramatic Me-Na-Ri (Space Music), a work for three choirs and percussion that stretches the boundaries of choral music.

Pacific Chorale’s signature holiday programming returns with two performances each of “Carols by Candlelight” – spotlighting timeless repertoire from the Renaissance and beyond, including works by contemporary British composers Bob Chilcott, Patrick Hawes, Cecilia McDowall, and Will Todd – and the beloved family favorite “Tis the Season!,” chock-full of festive carols, seasonal delights, and even a visit from Santa Claus.

This year, “Tis the Season!” will conclude with the first live performance of Emmy Award-winning composer Gary Fry’s new arrangement of “We Wish You a Merry Christmas,” which Pacific Chorale commissioned and premiered during last season’s virtual holiday concert.

“As Pacific Chorale resumes singing in person, I wanted to select works that both recognize the challenges we have all faced in recent times and reflect the diverse repertoire that our singers love to perform and our audiences have come to expect,” says Istad.

“Composers creating artistic statements right now are deeply connected to our current human experience. I sincerely hope their messages resonate with our singers and audiences in an immediate, powerful way. At its core, Pacific Chorale exists to unite people through choral music, so returning to live performances enhanced by the sparkling acoustics of Renée and Henry Segerstrom Concert Hall will, no doubt, be an incredibly joyful experience for all of us on the stage and in the theater.”

“We are extremely grateful to the Pacific Chorale’s loyal patrons, vital community partners and committed donors for helping the organization transition through the extended closure brought about by the global pandemic,” says Brown.

“While we made it a top priority to remain artistically connected to our patrons during this challenging time by pivoting to create innovative, digital programming, there is nothing like the visceral aspect of a live performance. We are thrilled to be able to, once again, welcome patrons back inside the concert hall and showcase the Pacific Chorale’s artistry in a concert setting.”

We’re excited to welcome back performing arts in Orange County!