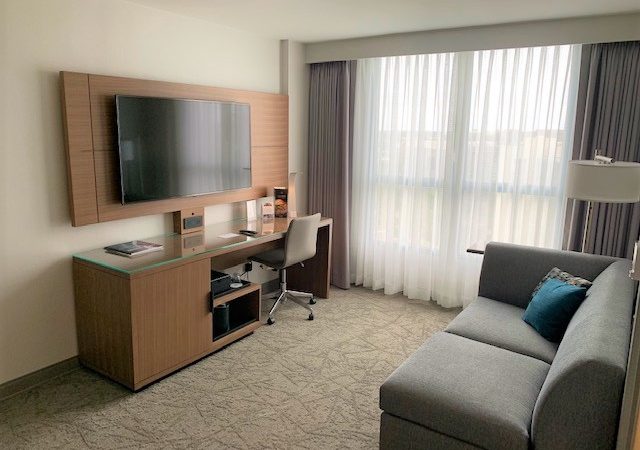 SOUTH COAST METRO, Calif., August 7, 2019 – In keeping with the evolving contemporary architectural and inspired interior design style that is becoming a hallmark of South Coast Metro, one-half of the area’s hotels are now refreshing guestrooms and public spaces or planning to do so soon.

The balance of the hotels will be looking to update in the near future to assure guests continue to enjoy all that South Coast Metro uniquely offers to business and leisure travelers.

Guestroom baths will convert from bathtubs to showers featuring floor to ceiling glass enclosures with neutral tones. Design elements of each suite include new artwork, a color palette of neutral tones with gray, silver and blue accents, and light wood accents. Hotel corridors will feature new carpeting highlighting the gray and blue tones from the guestrooms, along with wall coverings and artwork.

The Crowne Plaza Costa Mesa Orange County is doing a $4 million renovation of all guestrooms that will feature a pleasing color palate and complementary artwork, 49” LG 4K Smart TVs, new space-saving sliding doors in bathrooms and more. The installation of a new elevator and updates to the pool area are also on tap. A large colorful wave mural has been custom-painted outside to reflect the hotel’s proximity to Southern California beaches.

Major upgrades are in store for DoubleTree by Hilton Orange County Airport, which was built in 1985. Approximately $15 million will be spent remodeling rooms and corridors, converting about 70 bathtubs to walk-in showers, expanding the lobby and restaurant by about 3,000 square feet with an open concept design.  All event space will be remodeled and a convenience store will be added to the lobby.  The renovation will then move to the exterior of the hotel, with full replacement of landscaping, adding outside fire features to the restaurant patio, renovating the pool deck with updated pool furniture.

Among updates at the Residence Inn Costa Mesa Newport Beach will be an expanded onsite marketplace and social and buffet space, along with comfortable new outdoor furniture.

At Courtyard by Marriott South Coast Metro improvements include a newly renovated lobby featuring a modern color palette with gray tones, contemporary lighting fixtures and collaborative seating to accommodate small groups, along with a refreshed exercise room and two meeting spaces with a new boardroom. Two charging stations for electric cars have been installed in the parking lot. Guestroom renovations are planned for 2020 and will include tub to shower conversions.

Over the past few years, major renovations have been completed throughout the Avenue of the Arts Costa Mesa, which has a coveted AAA Four-Diamond designation.

“We are delighted these hotels in the South Coast Metro continue to refresh in keeping with the culture of creativity, comfort and innovation that distinguishes Orange County’s Urban Center,” said Diane Pritchett, executive director of the Alliance.

For over a quarter-century the South Coast Metro Alliance has implemented and coordinated programs that focus on marketing, business attraction, expansion and retention as it unites developers, property owners and key corporate leaders.

South Coast Metro Alliance is a nonprofit corporation of property owners and major businesses having a long-term investment through ownership and/or long-term leases. As a cohesive group they work collaboratively with a variety of entities including the County of Orange, the Cities of Costa Mesa and Santa Ana, Orange County Transportation Authority, Costa Mesa and Santa Ana Fire and Police Departments.  As an economic development organization, South Coast Metro Alliance markets and promotes South Coast Metro as Orange County’s Urban Center, encouraging businesses to relocate to the Metro.