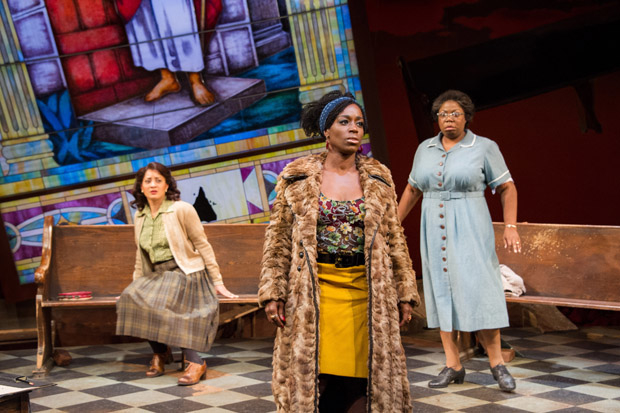 She was known as one of the 20th century’s most powerful and impactful voices, not only as a singer, but also as a voice for the silent. South Coast Repertory (Artistic Director David Ivers and Managing Director Paula Tomei) opens the 2022-23 season with Nina Simone: Four Women by Christina Ham Oct. 2-23 on the Julianne Argyros Stage.Tickets are available now at www.scr.org.

Directed by Logan Vaughn, who helmed SCR’s Pacific Playwrights Festival’s reading of Dr. Silver: A Celebration of Life last spring, Nina Simone: Four Women tells the story behind the iconic singer fulfilling her pledge that “An artist’s responsibility is to reflect the times.”

Following the 1963 bombing of the 16th Street Baptist Church in Birmingham, AL. that killed four young girls, Simone shifted her considerable talents to activism. The result was some of the most powerful, impactful civil rights anthems ever written. Ham’s intensely personal play with music takes theatregoers into how the iconic chanteuse gave voice to countless other Black women fighting to overcome stereotypes and racism.

Nina Simone: Four Women includes many of Simone’s most forceful and gripping songs, including “To Be Young, Gifted and Black,” “Go Limp” and “Mississippi Goddam.”

“Nina Simone was deeply talented, hugely ground-breaking and fiercely independent, and through Christina Ham’s amazing script, Nina’s talents and passion to see the world reflected back to her are on full display,” Ivers said. “With the gifted direction of Logan Vaughn, you’ll hear and see a powerhouse cast tell Nina’s story through the eyes of four Black women. It’s an honor to have this cast of four women and one amazing piano player who share Nina’s metaphoric DNA on our stage.”

“We look forward to welcoming audiences back to our Costa Mesa home and kicking off a season of adventurous, passionate theatre,” Tomei said.  “Our 2022-23 season offers great options for every theatregoer and we are immensely grateful to the audience for joining us on this journey.”

A prolific and versatile writer, Ham recently signed an overall deal with Universal Content Production. This came on the heels of her work as a supervising producer on “Westworld.” Previously, Ham served as a co-producer on “Sweet Tooth” for Netflix/Team Downey/Warner Bros. She spent two seasons on “The Chilling Adventures of Sabrina” for Warner Bros./Netflix. Her plays have been produced nationally and internationally at The Kennedy Center, Center Theatre Group, Guthrie Theater, Goodman Theatre, off-Broadway at Theatre Row, The Market Theatre in South Africa and the Tokyo International Arts Festival, among others.

Ham’s theatre for young audiences play Four Little Girls, Birmingham 1963 was performed in front of a sold-out audience at The Kennedy Center to commemorate the 50th anniversary of the 16th Street Baptist Church bombing.

Tickets are now on sale and range in price from $32 to $105, with additional discounts available for educators, seniors and theatregoers ages 25 and under. Tickets may be purchased online at www.scr.org or by phone at (714) 708-5555. More information is available at www.scr.org.