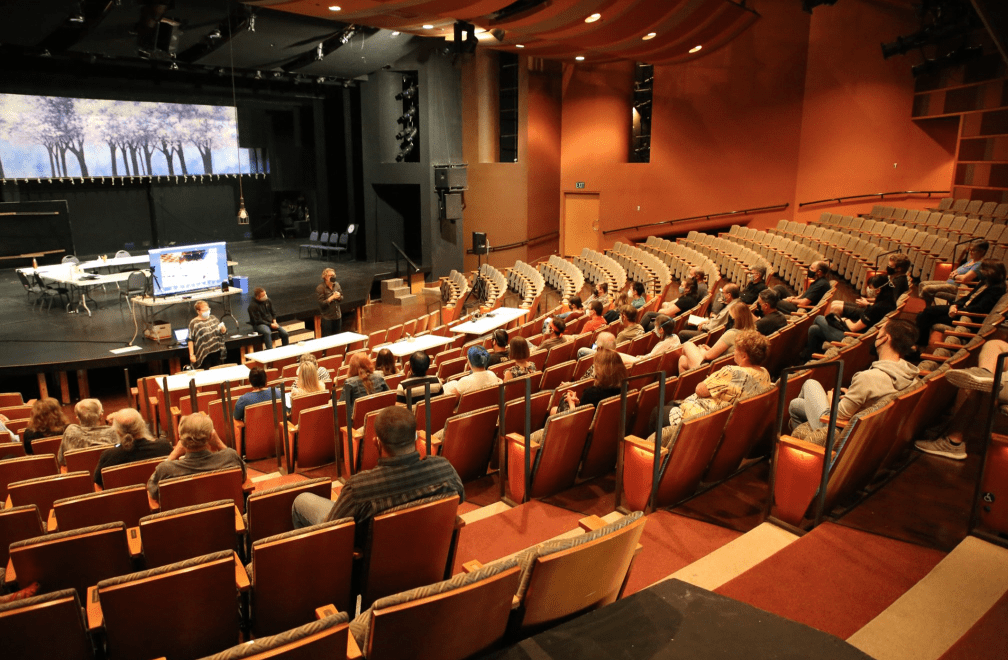 A Shot Rang Out is an enthralling, timely and often-funny glimpse at the present. Coming out of a long period of isolation, an actor returns to the stage, discovering meaning and understanding of what led to his seclusion.

His story of redemption takes you on a path through his isolation, where he draws inspiration from movies, theatre and 20th century popular culture to understand how emerging from isolation brings its own surprises, including the renewal of hope and discoveries that unravel the mysteries of love.

“As we return to live theatre, I can think of no more fitting and exciting way to open the season than with A Shot Rang Out. This world-premiere celebrates a three-decade history that SCR shares with playwright Richard Greenberg, and it features the incredible talents of Tony Taccone and David Ivers in a play that is very much of the moment we, as a community, are experiencing right now,” Tomei said.

One of SCR’s most celebrated legacy playwrights, Greenberg premiered eight plays at the Costa Mesa theatre. A Shot Rang Out marks his ninth play for South Coast Repertory.

“I’m honored and humbled that Richard would write this work for me,” Ivers said. “The story he crafted gives us a lens with which to see where we’ve been, where we are and where we’re going in these ever-changing and unpredictable times.”

Ivers is the sole cast member of this one-man play. Before joining SCR in 2018, he was artistic director for Arizona Theatre Company and, before that, served more than 20 years as an actor and director at Utah Shakespeare Festival, with the last six as artistic director.

He was a resident artist at Denver Center for the Performing Arts for a decade, acting in and/or directing more than 40 plays and has helmed productions at many of the nation’s leading regional theatres including the Guthrie Theater, Oregon Shakespeare Festival, Berkeley Repertory Theatre and South Coast Repertory. Ivers appeared in productions at some of the nation’s top regional theatres including Portland Center Stage and the Oregon, Alabama and Idaho Shakespeare festivals.

Tickets are now on sale and range in price from $26 to $93, with additional discounts available for educators, seniors and theatregoers ages 25 and under. Tickets may be purchased online at www.scr.org or by phone at (714) 708-5555.

It's rare a luxury brand continues to be significa

Notice: Undefined offset: 0 in /var/www/wp-content/plugins/userway-accessibility-widget/userway.php on line 69
Scroll To Top