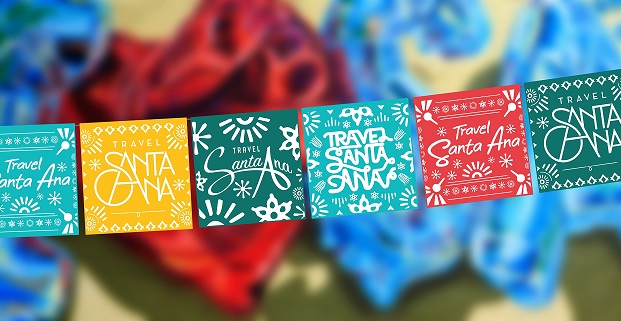 Travel Santa Ana, the city’s tourism promotion organization, debuts its first-ever brand campaign, “Proud Santanero,” featuring artists and artisans who both live and work in Santa Ana and whose identities are inherently tied to the vibrant city. Each person and place is unique and collectively they weave together making Santa Ana a community that is united by originality. The new campaign, which highlights the city’s pride through authentic stories and art, includes artistic expressions of the city name by a series of select individuals (in place of a traditional logo) and an ongoing video content series that will be used in a myriad of ways showcasing local businesses and creators.

“Santa Ana has a deeply artistic and proud community,” said Wendy Haase, president & CEO of Travel Santa Ana. “As the new tourism marketers of the city, it makes sense to harness what makes this city great and stand apart from others – our people and diverse cultures. When it came time to build our brand, we ensured it is reflective of the people that live here by including them. The new brand aims to capture that special feeling that’s evoked when one spends time in Santa Ana, which is that it’s so different from the rest of the Orange County area.”

The variety of the featured video participants and their independent businesses echo the diversity of the city. Barragan and his wife, who hailed from Mexico nearly three decades ago, describe 4th Street in downtown Santa Ana as a little slice of Mexican culture. For Yanez, one of his favorite parts of Santa Ana is the impressive murals, each depicting a unique story. Sanchez highlights the history of the city, from the 100-year-old brick buildings to the local theaters, intermixed with the urban and diverse culinary offerings downtown. Bergman discusses the walkable nature of the city, highlighting the Artwalk, which allows visitors and the community to experience the rich arts scene in Santa Ana. Travel Santa Ana will feature additional Santa Ana individual business owners and community members through this ongoing video series.

“It’s an honor to be a part of the ‘Proud Santanero’ campaign, as I’ve been a business owner in Santa Ana for six years and feel such a deep connection to the city of Santa Ana,” said Delilah Snell, owner, Alta Baja Market. “We have so much to offer here – from an incredibly diverse culinary scene to a rich local art community – and are excited to work with Travel Santa Ana to spread the word about our creative and welcoming city.”

Rather than creating a traditional corporate logo, the organization partnered with local artists to create four signatures, each with their own individual feel and perspective on how to depict Santa Ana. The four local artists that make up the first class of signatures include Wendy Duong, Brian Peterson, Alicia Rojas, and Aki Tsuneizumi each with their own inspirations and relationship with the city of Santa Ana.

As the city of Santa Ana is ever evolving, the goal of this project is to tap more local artists and continue to expand the signatures in the future.

Travel Santa Ana is Orange County’s newest destination marketing organization (DMO). Despite being the second largest city in Orange County, Santa Ana had not previously had a dedicated tourism promotion entity until the DMO’s official launch in 2021, which was nearly a year in the making.

Travel Santa Ana is the City of Santa Ana’s core tourism promotion organization dedicated to creating long-term and sustainable economic growth for the region and its partners through innovative tourism programs, promotions, and partnerships. Travel Santa Ana is funded by the Santa Ana Tourism Marketing District, which includes 17 hotels and motels in Santa Ana, Calif.